Every Great Team deserves a cheering section, and in this group effort, the only cheerleaders required were already there... 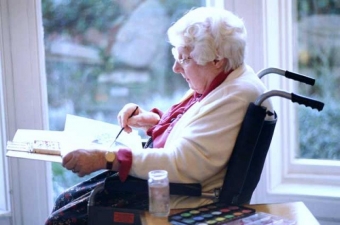 After my last blog I am ready to kick over my soap box, if only momentarily…

Although spring is hopefully upon us, memories of a cold and bitter winter remains fresh in our minds. Winters of my youth were always graced with an abundance of that familiar “white stuff,” but then it seemed much more fun, almost festive.  Perhaps I am getting old, because I do not remember school closures, but conversely I do recall trudging along the sidewalks to school, crunching snow beneath my feet and the winds kept at bay by the knitted scarf covering my nose and mouth.

For those of you who are now wondering if the journey was “uphill” both ways, the answer is no, that story belongs to the generation before mine.

For years now, it seems the weather has been erratic and this past winter proved to test even the most stoic Canadian family. But there were other harsh winters that come to mind as I again reflect upon the caregivers who provide services to the elderly.

And so, here unfolds a true story...

A few years ago when the weather was equally tumultuous, it became abundantly clear that the speed of snowfall and the accumulation of snow greatly exceeded the number of plows available to clear pathways.  Although private contractors were engaged, there were only so many plows and the amount of snow pelting the landscape seemed unyielding.

It was on one of those harsh days, a small army of frontline employees of a Long-Term Care home: Management, Registered nursing staff, Personal support workers, Dietary workers, Recreation Therapists and other members of the team; instrumental to the functioning of the day to day operations, decided they would stay at the home for the night.

Their choice was to remain in the Long-Term Care home in the event that some of their colleagues could not attend the next shift in a timely manner because of projected inclement weather.   Based on the forecasts of heightened storm activity, their assumption was correct and the next day, staff straggled in amid the frigid temperatures.

For those who lived in the home, there was a sense of normalcy, exactly what the staff was hoping would happen. Perhaps, a delay here or there, but all was well; there were hot meals, personal care and activities.  As the Elders watched the swirling snow from their window seats; there was a sense of security and the building hummed with the positivity of those staff who made sure that “their extended family” was in good hands.

This act of kindness happened more than once that winter, because of the intense weather, excessive snowfall and the staff who cared to make a difference.

This story never made the press, no television stations were called, no reporters summoned, no radio stations notified; there was no announcement, no video, no proclamation that there were truly people in the care industry...that cared!

The Cheerleaders were there however, but cartwheels were replaced by the wheels of their chairs sliding confidently along the corridors, and although there were no waving pompoms, there was silent cheering for the home team.

...And this my friends, is why we celebrate the frontline staff.